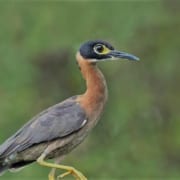 The white-backed night heron is an elusive and rather poorly known species of crepuscular piscivore. A relative of the much more common black-crowned night heron, this secretive and shy inhabitant of slow-flowing rivers and dams are generally regarded as rare throughout a rather wide distribution. They can be seen from the east cape of South Africa along the Indian coastal belt through to the Lowveld and into parts of Southern and central Africa.

But they can only be spotted in their suitable habitat which makes finding them for your life list that much trickier.

Difference between the White-backed and Black-crowned Night Herons

The species stronghold is undoubtedly the Okavango Delta where local mokoro based excursions from many lodges in the area offer a good chance of connecting with this sought after skulker. Birds are most often seen when flushed from bank waterside vegetation where they roost in the deepest shade during the daylight hours. They are generally active from early evening into the night before flying back to their roost sites as dawn approaches.

White-backed Night Herons (Gorsachius leuconotus) as with most herons are opportunistic feeders with fish, arthropods, frogs and freshwater crabs comprising most of its diet. Some of their prey will simply be seized because it is available. A strong spear-shaped bill is used to spear passing prey at such speeds that the prey passing won’t know what hit them.

Underwater prey is waited for patiently, usually from vegetation overhanging the surface of the water or from a waded position just out from the bank. These birds can sit motionless for long periods of time until the opportunity arises. Like all herons, they possess specialised neck vertebrae. The neck is able to kink in an S-shape, due to the modified shape of the cervical vertebrae. This acts as a coil spring which gives their hefty bill incredible speed when the head is shot forward towards unsuspecting prey.

Another incredible feature of this hunting method is that these birds automatically take into account the refraction that takes place when looking into the water. The head of a heron corrects for light refraction at the water’s surface by adjusting the position and keeping a constant relationship between real and apparent prey depth.

Where do they occur in South Africa?

In South Africa, there are very few reliable places to find this endearing species with several sites along the garden route and Eastern Cape, Lake Phobane in Kwa-Zulu Natal and Lake Albasini in Limpopo offering some of the better chances. Something that is quite exciting is that this special species has been recorded quite regularly at EcoTraining Karongwe Camp. Most records are from the weir along the Karongwe River within the reserve, but birds have been seen at nearby Spectre and GVI Dams as well as from within camp itself.

This is wonderful news for birders who have been eluded by this beautiful bird as here at Karongwe there is the potential, for those who are fortunate, to access one of Africa’s most desired birds while taking in the beauty of the African wilderness and the stunning Lowveld.

If you are a keen birder or want to learn more about birds, why don’t you try your hand at our EcoTraining Bird Challenge?