Have ever wondered who was the first member of FGASA? His name is Ian Thomson, and his FGASA number is 1. He still lives and breathes wildlife and nature conservation.

Humble Beginnings
Born in Scotland in 1945, as a child Ian moved with his family to Southern Rhodesia, now Zimbabwe. Finishing school at the unique bush-orientated Plumtree School, where he developed his first love of the wilds, Ian managed a tobacco, cattle and maize farm, before deciding to join his two elder brothers in the Department of National Parks and Wildlife Management.  Thus Ian not only pursued his passion for wildlife but had an in-depth hands-on training in all aspects of wildlife management and conservation.

The Road to Conservation
Initially based in Chirundu, on the Zambezi River between Zimbabwe and Zambia, Ian was responsible for a huge hunting concession consisting of five hunting camps, hosting local and international clients.  He was predominantly involved with everything that had to do with reserve management, from elephants and buffaloes to even the smallest creatures, insects and plant life that constitute an eco-system.

After every hunting season wildlife assessments had to be undertaken.  This was done by vehicle on the few existing tracks, but mostly with foot patrols, going from waterhole to waterhole, along elephant paths and rivers, up and down hills and even sitting up in trees doing 24-hour game counts.  Although some aerial counts were undertaken using small aircraft, large numbers of rhino, buffalo, elephants and many more wildlife species was best done at water holes. Today’s modern computer technology was unheard of in those days, which meant lots of paperwork back at the office once the appraisals were completed.

Ian pointed out that “In those days’ conservation had to be done on your feet so one knew very inch of your area.”  Ian remembers clearly when one night a herd of buffalo came through the camp surrounding his tent grazing until daybreak. When counted at the nearby waterhole it was estimated there were 1,200 buffalo in that herd. “The now critically endangered Black Rhino were so numerous as to be a nuisance during foot patrol!”

After 6 years in the Zambezi Valley, Ian was relocated to Nyanga National Park as Senior Ranger. Situated in the north of Zimbabwe‘s Eastern Highlands and one of the first national parks to be declared in the country, it features the highest rugged mountains in Zimbabwe.  Whilst stationed here Ian studied Ecology at the University of Rhodesia after which he focused on environmental education, a subject he is particularly passionate about.

As a Warden in the Matopos and Hwange National Parks, Ian gained further experience of different ecologies and wildlife management. Leaving Zimbabwe for South Africa in 1982 he was the Chief Conservation Officer with the Department of Agriculture in the Ciskei, assisting in developing the Double Drift Game Reserve. He also organised a Hippo capture operation at Ndumu Game Reserve in Kwazulu-Natal and transported a number of animals to the Fish River which bordered Double Drift. These Hippo are still doing well there today.

Ian then joined the Department of Conservation of Kwazulu-Natal as Head of Tourism and Wildlife Management, becoming Deputy Director then Director.  During this time, he qualified in Environmental Management (and EIA’S) from The University of Cape Town and Human Resource Management through Wits University.

Discussions about guiding standards in South Africa
While working for the Department of Conservation, Ian and his peers had become concerned about the standards of safari guides and guiding, and that there was no formal qualification available.

This was when Clive Walker called a meeting at Lapalala with Ian Player, Nick Steele, Ian Thomson and Drummond Densham from Natal Parks Board.  FGASA has grown from there with Ian being one of the first members to enrol for his Field Guide qualification.  Thus being at the right place at the right time is how Ian became FGASA membership # 1.  Ian is also qualified as a Professional Field Guide (formerly known as Field Guide level 3) and has an SKS dangerous game qualification.

The word retirement does not exist in his vocabulary

Recently, while working in Zululand, Ian has been lecturing international students from universities and colleges in the United Kingdom England about all aspects of Wildlife and Environmental Management.

Ian does not believe in retirement. Being very active in wildlife and conservation, continuously thinking of new ways to empower people with environmental knowledge and sharing his experiences and knowledge, Ian enjoys guiding and taking people on walking safaris in dangerous game areas. If that does not inspire you, then nothing will!

It takes only one person to make a difference… Ian is one of those people!

If you find yourself daydreaming of being in the African wilderness or have a passion to make a difference. Why not take a look at the EcoTraining Courses that we offer. 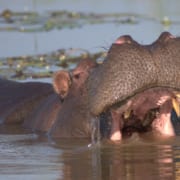 It seems unfair that the Hippo did not make it onto the Big 5 list. Surely, since they are the 3rd largest land mammal after the elephant and the white rhino, and they are considered to be the most dangerous, they deserve some sort of recognition? That being said there are many stories and legends about the huge ‘River Horse’. Here are some of the facts that you might not know about this fearsome creature: One of the most famous South African hippos was Huberta (originally called Hubert, she was correctly named after her death). Her fame lasted for three years as she walked several thousands of kilometre from KwaZulu Natal to King Williams Town in the Eastern Cape back in 1928. No one knows what started her walking, but she certainly captured the attention of the media, both local and international during this time. An African myth about hippos:

How the hippo came to live in the water is one story that is often repeated around an evening campfire. Many millennia ago, most of the African animals lived together on land and only very few could be found in the rivers and lakes. The baking hot sun caused many of them discomfort, but they were lucky and had feathers, fur or scales to protect them from the energy-sapping rays. However, Hippo’s skin had none of that protection and as he grew in size his skin stretched and became extremely sensitive to the harsh rays of the sun. Finally, Hippo could endure it no more. He asked the Creator if he could live in the water to keep cool and protect his sensitive skin. “You may”, said the Creator. “You must ask the permission of those already living in the water as you are large, and they fear that you will eat all their food”. To allay their fears, Hippo explained that he did not eat fish, but only consumed the vegetation that could be found on the riverbanks. As the river inhabitants were still sceptical, Hippo made them the following solemn promise. “I will open my mouth wide every day, in order for you to see that there are no fish bones or scales in my mouth. And I will use my tail to spread my dung, to prove that there no bones” Finally, the river animals were convinced and from that day forth, the hippo has lived in the water, opening his mouth and spreading his dung. The next time you come across a hippo, take a moment and give it the respect that it deserves. Do you have any specific questions about hippos you would like answered? Is there another specific non-Big 5 animal you would like us to write about? Drop us a comment below and we will respond to you.